To receive art and inspiration once a month in your inbox 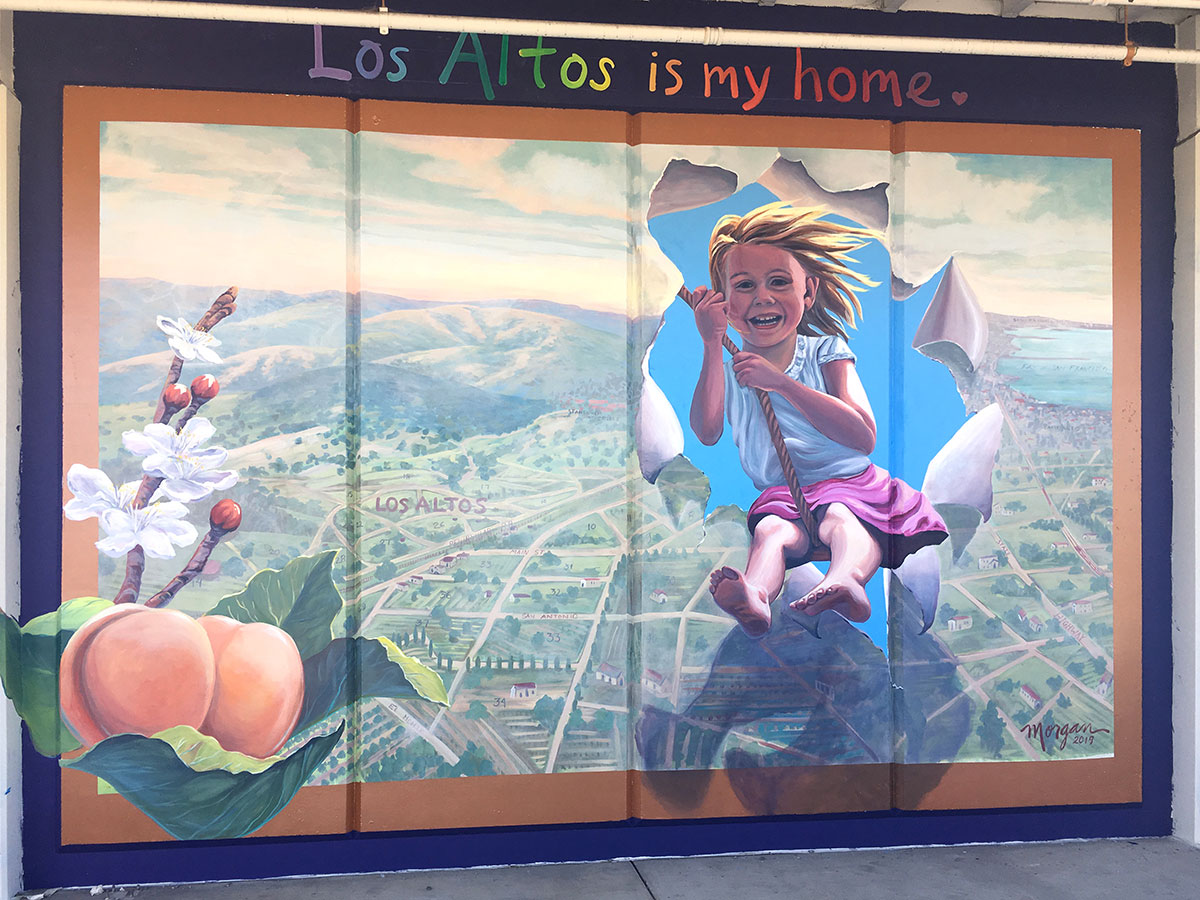 This year, the Santa Clara County Fair turns 75. To celebrate the big event, which starts today, the fairgrounds has commissioned fifteen local artists to create fifteen 20’ wide murals, each celebrating a town in Santa Clara County. I am honored to represent Los Altos! As a whole, we are retro folk, happy to retain our “small town” feel. Combined with top-notch schools, Los Altos is famous as “A great place to raise a family.” I wanted to capture the feeling of a carefree childhood in the mural. Our family is blessed to have an enormous pecan tree in our backyard. When we moved in 12 years ago, we attached a looooong rope swing. With a few strong pushes, the arc of the swing covers the entire width of the backyard. Since T.V. and junk food were banned in our house (I would have changed our last name to “Ingalls” to honor my ideal family from Little House on the Prairie if I could have), it was the big attraction of our house. Besides, what fun is a childhood that doesn’t involve risking life and limb for a thrill? I found a photo of Allie on the swing when she was about six years old. I layered that on top of a vintage “Lots for Sale” map of the city. When I showed my next-door neighbor, and longtime resident the design she said, “Where’s the apricots?” A Los Altos mural couldn’t completely represent our area without apricots!

The new fairground murals will become a permanent part of the space. The event runs through the weekend, and the daily schedule is here. Come for the animals, the music, and the murals. Tonight the entry fee is only 75¢. I will be hanging out in front of the mural tonight, Thursday 8/1, from 5:30-7 pm. Stop by and say hello! 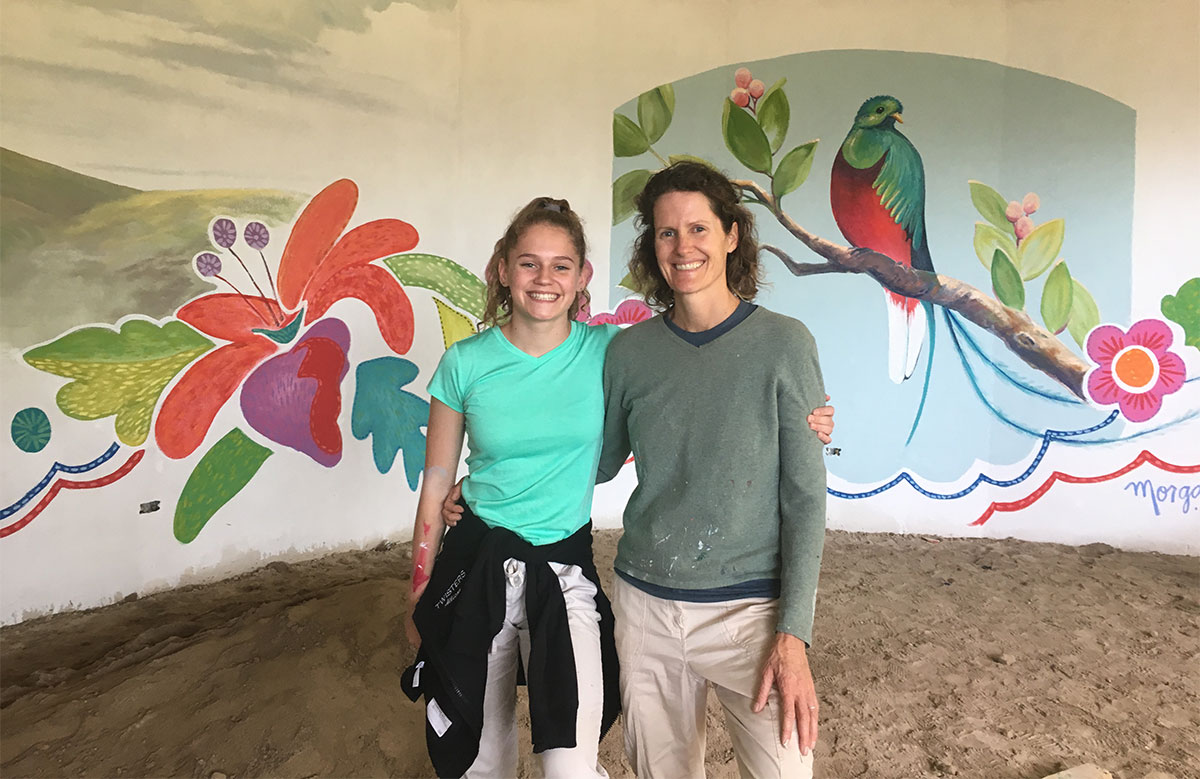 My daughter Allie is now 15. The big smile persists but the rope swing has been replaced by a trampoline, which our danger bunny uses to perfect her gymnastics stunts. Allie and I recently spent a week together in Guatemala on a service trip organized through Dream Volunteers. During a video conference call shortly before we left, they let us know that on this trip volunteers would be working on laying the floor for a new classroom, so we would be shoveling dirt to level up the floor, and also mixing and spreading concrete. In a thinly veiled attempt to evade hard labor, I offered to paint a mural in the classroom. They were skeptical; I am probably not the first volunteer to make a fast calculation of the bugs, the heat and dirt in my lungs and offer myself up for an easier task. To help persuade them, I sent them to my website. They got back to me and said a classroom mural would be a wonderful addition to their new room.

In Vuelta Grande, a half hour drive from Antigua, nearly every female child stops going to school after sixth grade… if they make it that far. When girls stop going to school, they usually help with household chores, look after younger siblings or begin working as domestic servants, or are arranged to be married, starting families of their own at very young ages. We visited a typical home in Vuelta Grande and met Manuela, who gave us a “house tour”. Manuela didn’t receive and education and married young. She was warm and full of smiles, and a shy six-year-old daughter was wrapped around her leg, her fifth child. Her daughter stayed home alone when she went to work at a nearby orchard a few hours each morning, but Manuela said maybe next year she would send her daughter to school. Manuela’s kitchen was a windowless dirt floor hut with no running water, the air thick with smoke from the wood fire she tended all day long for cooking. The second structure had a mostly dirt floor and three mattresses for the family of 7. The new classroom Dream Volunteers built at the school sits in stark contrast to the primitive dwellings of the families that surround it. It is large and flooded with natural light, and features concrete floors, desks, schools supplies and now, the colorful mural. The physical environment can influence culture. In this case, to coax otherwise reticent parents to value education and send their kids to school. A beautiful, cared for space is a natural pull for children and parents alike. 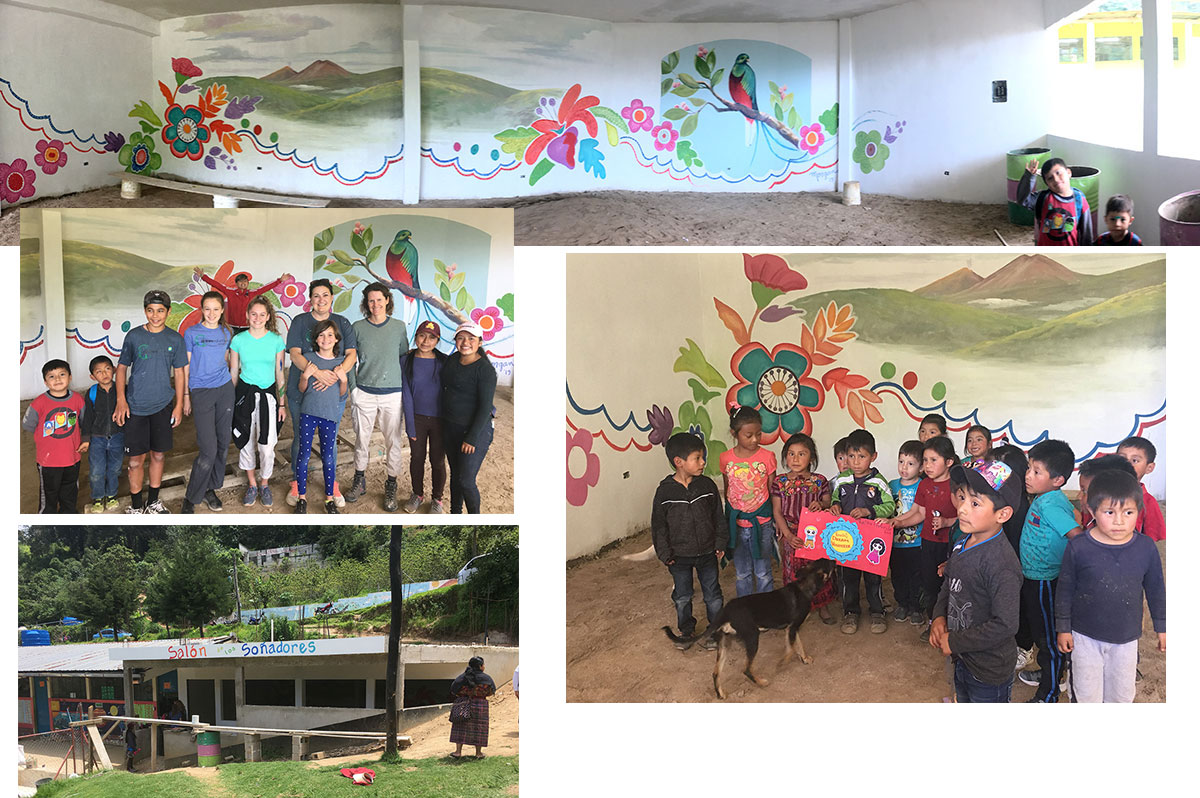 We spent the last part of our trip at the Young Dreamers school in Antigua. They had a beautiful wall prepared for a mural. The Young Dreamers mural was completed by our five person crew in just seven hours!

Christian, the English teacher at the school, is a talented artist and wordsmith who came up with the words for the mural, “Tus sus suenos enriquezan a los míos…” which translates roughly as: “Your dreams enrich my own…”

I was surprised to learn in the book Drawdown, (edited by Paul Hawken, read it.) that out of 100 existing solutions to mitigate climate change, educating girls ranks as the sixth largest impact. If you combine educating girls with increased adoption of reproductive healthcare and family planning (they correlate closely), together they would create THE LARGEST potential carbon offset, by far. It turn outs that when girls receive a secondary education, it delays motherhood, lowers infant mortality, enables entire families to become more resilient to economic, medical and environmental calamity, and gives women more voice in family structure, including in number of children they will have. Educating girls in low and low-middle income countries should be a top priority if we want to slow climate change. It turns out it is also one of the least expensive solutions. 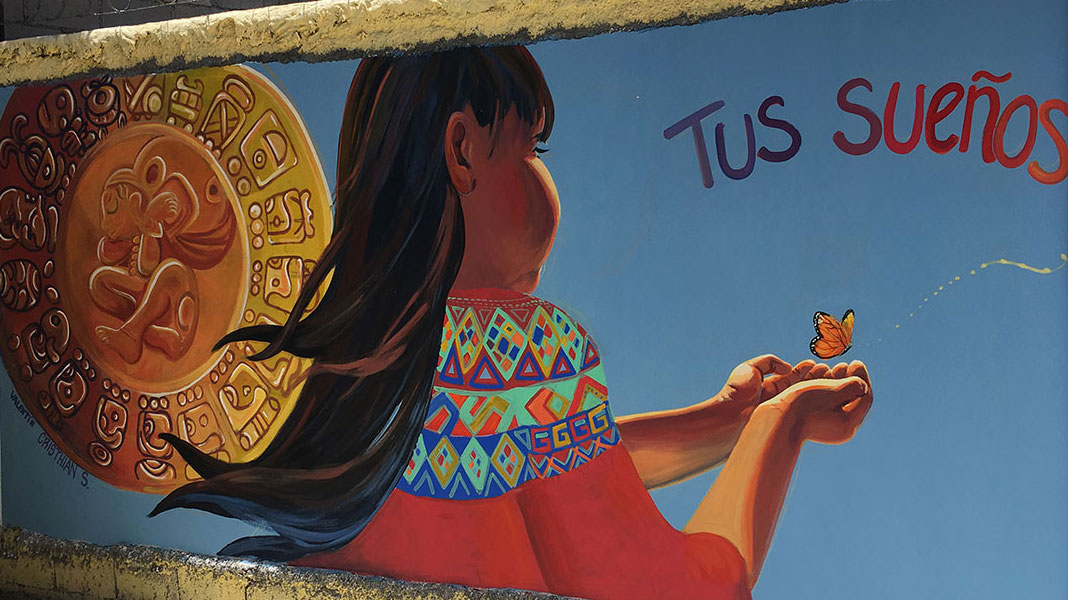 Back to the TED talk : I am so moved by this young activist’s urgent message, I would like to paint a Greta Thunberg mural somewhere in the Bay Area. I have found a sponsor, but have not yet found the right wall. If you know of a street-facing wall where I might be able to paint a mural of Greta, please let me know.